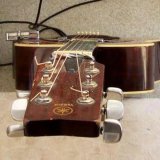 A brief history of my musical activites
Key to my work is the ongoing fascination with the relationship between music and the visual arts.
As such, for me they have often worked in tandem, such as providing artwork for my musical activities.

These began in 1983, when I embarked upon a series of musical associations, playing bass guitar in a variety of bands encompassing rock, jazz, blues and folk; (and producing numerous logos, posters, cassette inlays and illustrations in the process.)

In 1991 I formed my own band, Cleopatra’s Needle, producing several recordings, (as well as my creating logo designs, posters and illustrations.)
In parallel to the above, I also became involved in the rock band Arena in 1994, performing on their debut album, released in early 1995.

In 1999, after Cleopatra’s Needle came to a natural close the previous year, I decided to concentrate on solo projects, beginning with a long-gestating ambient-style project. Under the working title Music for Exhibitions, I made a series of recordings conceived to accompany the private views of my art shows.
The resultant album, Inner Landscapes, is a collection of tonal impressions, which, although nominally ambient, was intended to be more than mere wallpaper music: I was interested in making it also work as a listening experience in its own right, (or, as I like to say, bridging the gap between active and passive listening.)

This process of adding music to a visual medium was reversed in 2009 when I staged my debut solo concert, A Sense of Space, and again in 2016, with a further performance, Shifting Focus. These featured pieces from Inner Landscapes (alongside other pieces) with slide shows of my paintings and photographs as visual accompaniment.

My overall interest in combining music and visuals continues and further activities and events will be posted on this site in due course – watch this space!
Next
Previous