A Matter of Inspiration

This article originally appeared, in edited form, in the 30 July 2008 edition of the Bromley News Shopper.. (Reproduced with permission.)
The question that I’m most often asked regarding my work is: “what inspires it?”
For me this is a difficult question to answer as, unlike most artists, I do not have specific sources of inspiration.

I take my inspiration from anywhere and everywhere, from the sublime to the ridiculous.
Granted, there are elements which I constantly find inspiring; nature particularly: sunrises, sunsets and the marine world but these are general and do not relate to specific paintings. (Although they do - albeit unconsciously - permeate my work, as many viewers have remarked.)
As my work is all about the exploration of colour, I am often on the lookout for ways to combine colour and sometimes I’ll find them without even looking. It’s simply a matter of being open and not being limited by preconceived notions about what constitutes a good idea. Banal as it sounds, if, for example, a discarded sweet wrapper gives me an idea, I’ll use it.

The varied inspirations for these selections (all part of the exhibition) serve to illustrate my point. 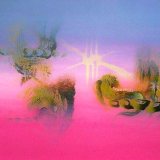 This painting from 2002 is part of a series where I introduced a greater sense of depth. This was accomplished by adding a third dimension to selected elements, and by applying a light background wash over the central gold motif. This motif is also reprised in the foreground (albeit as a variation on a theme) for a touch of inner continuity.
The colour scheme was inspired by a photograph in a travel brochure, of Istanbul at dusk.
The golden browns of the buildings reflecting the setting sun against the mauves and pinks of the sky made for an irresistible colour combination. 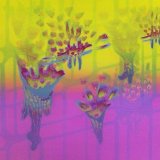 This 2004 painting is from a series where I wished to explore depth a little bit further. To this end, I devised what I called a “double background” approach, where the pattern and wash were applied twice (with various other elements blended in along the way.)
The colour scheme was an original idea, borne out of a desire to contrast bold, bright colours (the yellows and pinks) with more subtle, muted tones (the greys.) 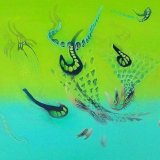 This is from my most recent series of paintings, from 2007.
With this set, I decided to abandon the background patterns and motifs, as I felt that I’d gone as far as I could with them.
The results have given a greater sense of space to my work, with no loss of depth. Indeed, these recent works comprise my most multi-layered pieces to date.
Regarding the colour scheme, I was given the idea by the paintwork on a piece of set design for the film “Nanny Mcphee”, (which only goes to show that I’ll take my inspiration from wherever it’s offered!) 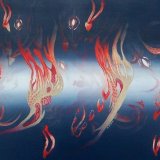 This 2007 painting was the result of a variation on an idea which was based upon the colour scheme of the train seat covers on the Jubilee line: red and yellow on dark blue. I decided to substitute a light sandy brown for the yellow and introduced white into the background.
This resulted in a uniquely vibrant piece and, of my own work, is one of my personal favourites. 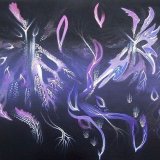 This painting from 2008 was inspired by the cover design of a biography of Joni Mitchell (entitled, appropriately enough, “Shadows and Light”), which mainly comprises a black background with white and mauve lettering.
I’d already produced a variation of this combination, where the colours were basically reversed, but here I decided to return to the original idea.
Of all my work this is probably the most starkly contrasted, but one that contains a certain elegance: I especially like the glowing, pulsating quality, which was achieved by adding an extra layer of white to selected highlights and “fading
Next
Previous