The Art of Tourism 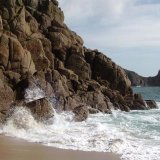 These photographs were taken whilst on holiday in Cornwall and Italy in 2005 and 2006 respectively, using a Kodak CX7330 3.1 megapixel digital camera, and again in Cornwall in 2014 using a Polaroid is426 16 megapixel camera.

When travelling, my intention is to capture images with a twofold objective: to portray the natural beauty and character of the place or object in question and to depict a sense of the unusual and unique in the seemingly ordinary.

This is often achieved by fortuitous lighting conditions and/or by careful choice of angles and framing (and occasionally by spontaneous “lucky shots”).

I have utilised this approach for many years but it was not until the pictures from the above trips were downloaded that I realised that many of them had a potential life beyond my private collection and would perhaps be of interest to a wider audience.

Originally reproduced as greetings cards, the response was sufficiently encouraging for me to consider exhibiting.
Subsequently, a selection was presented for the first time, in February 2008 (at the Central Library, Bromley. Kent) to an equally positive response.

With the above criteria in mind, each shot is intended to give an impression: sometimes of a fleeting moment (a seagull silhouetted against the sun); sometimes of a sense of permanence (the age-defying ruins of the Colosseum); sometimes of poignancy (the near-perfectly preserved floor mosaic of a house in Pompeii) and sometimes of the simple wonder of nature (a Cornish public garden).

Editing and enhancement are used carefully and sparingly, to bring the images to their full potential without unnecessary alteration.
As such, they reside at the midway point where holiday snaps and serious photography meet: the Art of Tourism.
Next
Previous