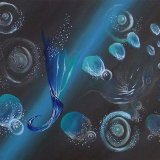 A little bit about myself.
I am an artist in the broader sense of the word, mainly self-taught, and operating in both music and the visual arts. Within these spheres my work encompasses a wide spectrum; as a musician blending Rock, Jazz, Folk and Ambient and as a visual artist ranging from line drawings to abstracts.

I have had a sustained interest in the visual arts since childhood and my interest in music has run in parallel since my mid-teens. Indeed, I have always viewed art as an all-encompassing whole, consisting of many forms, rather than viewing those forms as separate avenues of creative expression.
As such, I have always been intrigued by combining these different forms.

Although my interest in art goes back to my childhood, my artistic practice as such began in the early 1980s, producing the occasional drawing (e.g. portraits) for friends and family. (This occurred in tandem with my growing interest in music, which began in the mid-1970s.)
These pursuits intensified in 1983, when I also began a more serious involvement in music, joining a variety of bands over a period of several years, which also saw my producing a growing variety of artwork , such as posters, letterheads, illustrations, cassette inlays and logo designs (as well as miniature figure painting.)

This broadening of styles and genres eventually led to tentative experiments in abstraction.
Begun in 1986, these comprised watercolour and ink, and were produced on paper, and were intended to explore colour – a pet theme of mine, which continues to this day.

Apart from a brief flirtation with enamels in the early 1990s, I began utilising acrylics for my abstracts in 1998 and I have used them ever since.
Although I still produce a variety of work, my abstracts (under the generic title The Art of Abstraction) represent my most important work and since those early experiments, my approach has remained essentially the same:
As stated above, the paintings are primarily concerned with the exploration of colour as form in itself (or as form in potential)
Produced in series, all paintings are improvised, with only colour combination and/or background style pre-determined.
Each work is developed gradually, with one idea suggesting the next (building layer upon layer) until a cohesive image emerges, which is as much “grown” as designed.
This organic approach is crucial: each painting represents nothing but itself and is thus left open to personal interpretation, presenting a mirror for the viewer’s imagination and perceptions.
Consequently, no titles are given. This avoids inhibiting the scope for interpretation, allowing one to “fill the gaps” free of influence.

This interpretive quality is also present in my solo musical venture, Inner Landscapes, an album of tonal impressions (the aural equivalent of my paintings) where the relationship between viewer and picture is explored in sound.
This relationship was also explored in a different way in 2009, when I performed my solo debut concert, A Sense of Space (and again in 2016 with Shifting Focus), which featured live performance with simultaneous projections of my paintings and photographs.

More recently I have branched out into digital photography, with an ongoing series, The Art of Tourism, representing the meeting point of holiday snaps and serious photography.

Over the years I have also fulfilled a variety of commissions including illustrations, murals, posters etc., as well as providing slide shows for other performers and special occasions, and since 2008 I have been an affiliate member of the Bromley Arts Council, based at Ripley Arts Centre, in Bromley, Kent.
Next
Previous